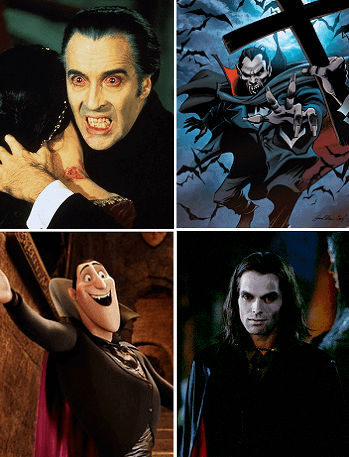 The Count has had many faces, some friendlier than others.note Clockwise from top left: Horror of Dracula, The Tomb of Dracula, Buffy the Vampire Slayer, and Hotel Transylvania.
"God bless the public domain."
— The Adventures of Dr. McNinja, on introducing Dracula
Advertisement:

A character that nobody owns anymore, or was never owned in the first place, that everybody wants to take a shot at writing.

Under U.S. law, works first published before 1927 are no longer subject to copyright. Before the 1970s, copyright was not automatic in the United States and most other countries, and it was possible for a copyright to lapse if not registered or renewed in a timely manner, so certain later works are public domain as well. In Europe, the rule is that the author has to have been dead for 70 years. The longest copyright term in the world is that of Mexico, in which since 2003, works do not enter public domain until the author has been dead for 100 yearsnote which is not retroactive; any author who died before 1952 is already in the public domain. Under the Berne Convention, work-for-hire has a copyright term of 100 years from the date of publication. Additionally, the holder of a copyright may choose to release it prematurely into the Public Domain.

Most notably, the authors only have to be dead for 50 years for their works to enter public domain in Canada or New Zealand - meaning that those of C. S. Lewis and Ian Fleming (died in 1963 and 1964) are no longer under copyright in those countries. Though Canada is a party to a 2018 trade agreement

that uses a minimum life-plus-70 term, it remains to be seen whether they will make that change retroactive. Mexico is also a party to that agreement, in which its "life plus 100" term is preserved. In Australia, the work of any author who died before 1955 is public domain; the country changed from a "life plus 50" term to "life plus 70" in 2004, but did not make the change retroactive.

Thanks to the trend of various changes in legislation, copyright terms can sometimes be cynically described as lasting at least X+20 years, where X is the number of years since the release of Steamboat Willie, the first widely-released Mickey Mouse cartoon. It is generally agreed that the most recent extension of American copyright duration — the Sonny Bono Copyright Term Extension Act

— was enacted at the behest of the Disney Company solely to keep Mickey Mouse cartoons from entering the public domain. This is why the act was derisively referred to by detractors as the Mickey Mouse Protection Act.

Given Congress' willingness to extend copyright duration any time Hollywood demands it, it is entirely possible that — in America at least — the pool of public domain characters has reached its maximum size and will grow no larger, except by accident or oversight. As of January 2012, it is now possible in the United States for works to be taken back out of the public domain

, leading to the inevitable conclusion that the pool of public domain characters has not only reached its maximum size, it is likely to shrink. (Ironically, the very same Hollywood corporations responsible for the original copyright durations would probably be the first to fight tooth and nail to keep certain properties in the public domain, if only so that they could continue making movies with some of the characters mentioned below.) However, no copyright extension took place in 2018—not even Disney lobbied for such a change. In fact, the main US lobby for authors now publicly advocates reducing copyright terms!note It Makes Sense in Context... authors welcome new additions to the PD, allowing them to create works that would previously have been illegal. This means that for the first time in two decades, the public domain saw new additions in 2019, specifically (almost all) works created in 1923.note Sound recordings were not covered by US federal copyright law until February 15, 1972, with recordings fixed before that date protected only by state law. Pre-1972 recordings were later placed under the federal umbrella, but state law would not have been preempted until 2067. Finally, in 2018, state copyright laws were once and for all preempted with regard to pre-1972 sound recordings. Pre-1923 recordings entered the PD in 2022, with other pre-1972 recordings following in subsequent decades.

This reversal of extending copyrights can be traced to, at least for U.S. copyright laws, something that was just becoming part of everyday reality in 1998 when the Sonny Bono Act was passed: the Internet. With now almost any work of literature, TV, film, or music now available to download legally or illegally, trying to keep an iron grip on copyrighted works and characters has become near-pointless. To address this, many companies have set up streaming services and places to legally download works, usually with incentives in place to make it more appealing to the consumer like extras included before only found on DVDs, higher picture quality for shows and movies, and offering a whole library of works on streaming services for a monthly rate instead of having to pay per download. Even Disney, the juggernaut who has often been responsible for copyright extension, has developed a "if you can't beat 'em, join 'em" attitude. They have now included many early cartoons for anyone to watch on their YouTube channel including, you guessed it, Steamboat Willie.

It should be mentioned as well the issue with derivative works, new works based on previous ones, such as adaptations. Although the original character or work may be in the public domain, a modern derivative work may not be. You can make your own derivative work of that public domain character, as long as it is clearly different from the version from the recent Hollywood blockbuster. Norse Mythology, in and of itself, is in the public domain, but if you try to make a blond Thor with a red cape and a hammer that Only the Chosen May Wield,note In the myths, it's simply a hammer so heavy that only Thor, the strongest god of all, is able to lift. Stan Lee changed that part because it would be meaningless in a world filled by superheroes and supervillains with super strength you may be in trouble.

It should be noted that, in general, a trademark is forever. As long as the holder of the trademark is creating some kind of "product" (media counts), and that they fulfill certain requirements (protecting the trademark is generally required), they can demand that the courts enforce the trademark. This is another reason why trademarks have become more common.

One interesting side note to keep in mind is that there is a difference between copyright (the legal right to control the reproduction of a particular expression of an idea or concept) and trademark (a symbol, character or design which is intended to be emblematic of a particular product or organization and used to identify them in a kind of visual shorthand). Public domain generally deals with copyright alone — meaning that it might be possible for someone to legally write a story with a public domain character, only to find they cannot legally sell their story using that character's name, because someone else holds the trademark. This has happened.

ruled that a public domain work doesn't violate the trademark of the underlying work. The specific ruling was a narrow one that dealt with "reverse passing off", rather than using a trademarked name. The ruling is generally believed to apply to using names as well, in which case it would indeed be legal to use a trademarked name on a public domain story, but no case that confirms this has reached the Supreme Court yet.

Of course, even if a character isn't in the Public Domain, a good writer can probably find a way to get that character in by creating a Captain Ersatz or an Alternate Company Equivalent, or by utilizing a Lawyer-Friendly Cameo. And if that writer can't even use a character he created thanks to the wonders of modern copyright law, then he can use an Expy. Sometimes, they can just graft that character onto a Historical Domain Character (see below). Of course, sometimes all this can just go too far, when a certain popular character becomes known as a Fountain of Expies.

A character can also fall into the public domain if it doesn't meet the threshold of originality — which means characters that are too simple to be copyrighted. For example, a single grey square cannot be copyrighted, nor can a stick figure.

Compare Historical Domain Character, which are people from Real Life; and Literary Mash-Ups, in which entire public domain works are... erm, "improved". Also be wary of examples in general found in the wild as, despite all pretenses, many people don't know much about copyright law in general and those that do, certainly don't know its many intricacies and legal interpretations. Further, copyright holders often give the impression that they have more extensive rights than they really do (for example, implying that an entire series is copyrighted, when some of it might be public domain). And indeed, for certain instances, people don't often realize the history of certain characters, resulting in Reality Is Unrealistic. See Santa Claus.

Keep in mind that producers may arrange for a license to use the name or likeness of a character even if it's likely to be in the public domain, or even if the use would not normally be considered infringement if it were not. An example regarding trademarks is the agreement between Conan O'Brien's producers and the owner of the Conan the Barbarian literary estate allowing Conan to use his first name as the title of his talk show. TBS apparently thought it prudent to get the agreement even though it's unlikely the literary estate would be so foolhardy as to sue; the defense of even a frivolous lawsuit would run to many times the cost of such an agreement.

Other public domain characters in media