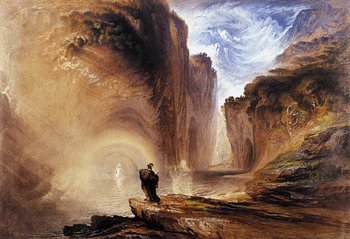 A "closet drama" by Lord Byron. It is written as a play but probably not intended by the author to actually be performed on the stage, as it would be hard to stage without Adaptation Decay.

The eponymous Manfred is a Swiss nobleman with the magic power to summon spirits. He is thoroughly miserable over the loss of one Astarte, and tries to contact her to find out whether (1) she is in heaven, (2) he will ever be reunited with her, and (3) whether his sufferings will ever end.