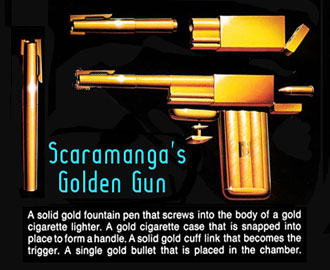 No wonder he charges a million a shot.
Advertisement:

What do you get when you combine IKEA Weaponry with your Shoe Phone? A really bad hotfoot. Also, a Scaramanga Special, a.k.a. the infamous Golden Gun; a custom weapon that is designed such that it can pass for a collection of mundane items when taken apart. A device like this is a step above a concealed weapon, as it is intended to pass even a full security screening and frisking.

If you're using firearms, the weapon itself is just a platform made of inert metal. Getting the ammunition — which will certainly contain chemical explosives — past effective security will be key.

Or, perhaps try a weapon based on gas pressure, springs, or a tiny crossbow, and have it rely on poison rather than impact.

These special weapons are designed in one of two different ways:

Put Together: Various components which may either be functional (eg: a cigarette lighter) or merely cosmetic (eg: a hood ornament) by themselves but they can be put together so it will function as a weapon.

Transformable: The weapon can be adjusted by either disassembling it or by manual manipulation to become something else (functional or cosmetic).

Despite the name, this trope does NOT refer to the ability of the Golden Gun in the GoldenEye FPS to kill in a single shot, even though the Golden Gun in question is named in honor of the Trope Namer. The gun itself was only really lethal because Christopher Lee's character was hyper-accurate. For golden guns in general, see Bling-Bling-BANG!.

Differs from Improvised Weapon: these are things used as weapons that may or may not normally be used in that fashion.

Also not to be confused with Swiss Army Weapon, Shapeshifter Weapon, Gun Accessories, or Morph Weapon.

[Trope Namer] Francisco Scaramanga assembles his signature Golden Gun from various mundane items made of gold and uses it to kill Hai Fat.

[Trope Namer] Francisco Scaramanga assembles his signature Golden Gun from various mundane items made of gold and uses it to kill Hai Fat.