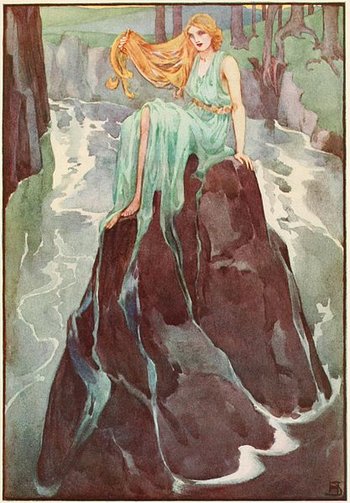 Lorelei, by Helen Stratton (1915)
Back in the days of knights in armor
There once lived a lovely charmer
Swimming in the Rhine
Her figure was divine

She had a yen for all the sailors
Fishermen and gobs and whalers
She had a most immoral eye
They called her Lorelei
—"The Lorelei", Pardon My English

The Lorelei (also Loreley) is a cliff of slate rock on the eastern side of the Rhine river near St. Goarshausen, towering some 130 m above the Rhine. The Loreley forms the inner side of a narrow river bend. Because of the strong currents and rocky shoals the point was formerly a dangerous spot for ships, before the shoals were removed with explosives in the 19th and early 20th century. Because of the steep rock faces that flank the Rhine in the area, the place is also known for strong echoes.

There is also a legend commonly associated with the rock, popularized by Heinrich Heine's ballad "The Loreley" (1824). This legends posits that a beautiful fairy lady can at times be seen sitting on the top of the Loreley combing her hair. Her looks and the song she sings are so entrancing that the skippers on the river forget to pay attention to their ships or the river, and this is the real reason so many boats are wrecked and drowned at the place. At least so claims, as Heine's poem says in the first stanza, a "legend of bygone ages" ("ein Märchen aus alten Zeiten").

… Or not. The truth is, there is no evidence that any such legend about the Loreley existed before Heinrich Heine's ballad. Instead, a lady called Loreley who supposedly gave her name to the rock first appeared in another ballad, written by Clemens Brentano in 1801; but Brentano's "Lore-Lay" (as he spelled the name) offers a tale that is completely different from Heine's: Brentano's Lore Lay is a beautiful witch who, despite men constantly falling in love with her, cannot bring the only man she loves back to her. Hence she eventually commits suicide by hurling herself into the Rhine from the eponymous rock. This tale is likewise an original creation by Brentano.

In contrast to Heine's poem, Brentano's ballad does not make mention of the nautical perils of the place at all, but instead aims to "explain" the strong echoes heard at the place (the ghosts of three knights who plummeted to their doom trying to get Lore-Lay down from the rock). Indeed it looks like Brentano was inspired by the Classical myth of Echo, just as Heine was updating the myth of the Sirens.

The Lady Loreley appears with some frequency in works of Romantic German poets, although no two tales about her are exactly the same; this is not surprising as the entire thing is essentially a literary game set off by the Brentano poem. It is, however, Heine's "Loreley" that has entered the popular imagination so much that it is widely accepted as the 'true' legend of Loreley. It has often been set to music, of which the best known is the one by Friedrich Silcher (1837).

The sudden interest in the Loreley rock at the beginning of the 19th century is connected to the development of tourism in the Rhine valley. Since then (even before the Heine poem) the rock has been a popular motif for postcards and paintings.

In the shadow of the Heine poem, the name 'Lorelei' is often explained as "insidious rock" (by assumed association with German "lauern", to lurk). It is doubtful whether this is true; while there is agreement that the second element of the name (lei) comes from a Celtic root meaning 'rock', the full name has also been interpreted as "shouting rock", "murmuring rock", or "elf-rock". These would refer to the echo in the gorge, elves inhabiting the rock (who are presumably responsible for the echo), or simply the sound of the water. Meaning you can pick your interpretation according to which Loreley legend you like best. It is also worth nothing that before the Romantic poets came up with the Lady Loreley, the rock was referred to as grammatically male ("der Lurlei").

Some versions of the Lorelei legend (links where available):

Tropes in "The Loreley" by Heinrich Heine:

Tropes in "Lore-Lay" by Clemens Brentano: