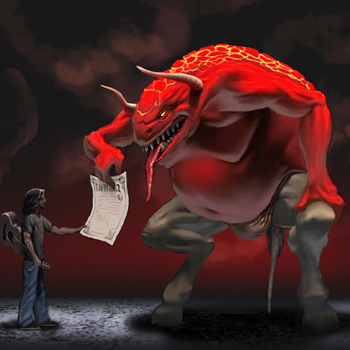 "Sign here, and here. Oh, don't worry about that, the soul consumption clause is never exercised."
"History has proven a thousand times that no man has ever gained from a bargain with The Dark, yet cowards and fools continue to try, and The Dark never turns them away."
— The Mayor, Myth: The Fallen Lords
Advertisement:

You know how it works. Want to be a millionaire, Take Over the World, gain infinite power, or just get back at that obnoxious Jerk Jock? Well, mosey on down to those crossroads and Mr. S will guarantee your wildest dreams, if you just sign on the dotted line with your own blood. This trope is Older Than Dirt, and does not even require the Abrahamic Devil; any trickster, demon, or evil deity roughly equivalent to Satan can be used. It reached its current version in the 16th-century legend of Faust selling his soul to Mephistopheles (who technically isn't quite exactly Satan, but still a high-ranking demon). The basic story is far, far older, however, with Sanskrit and Sumerian tales of craftsmen making deals with demons for superlative skill, making this Older Than Dirt.

An alternate form is a deal where the Mephistopheles offers the Faust exactly what he wants, if not more, but to get it, he has to undergo an Impossible Task that Mephistopheles obviously does not think the Faust can complete, with the Faust's soul as the penalty if he fails. In such occasions they can escape the Devil's trap. Alternately, the deal truly has no strings attached, as it's a Xanatos Gambit where the Faust's good fortune or success will deliver the soul of another to Mephistopheles. Finally, there's a form of this in the case of villains that make a deal with the devil for supernatural power, which often involves the villain doing something truly heinous for the devil in question in order to earn their favor. Magic gained in this fashion is very often Black Magic by definition.

Deal With The Devil plots can overlap with Idiot Ball, as smart and rational people know to stay well the hell away from deals like these. Some writers try to defend the Faust by turning the deal into a Leonine Contract - either the deal was made when the Faust was in desperate straits or under some kind of duress, or the Mephistopheles made the offer when the victim had no time to think (e.g., offering to save him from the Death Trap in return for something nasty). Others make the contract so long, complex and filled with Latin-esque legal jargon that no one will Read the Fine Print (Sloth is a very undervalued sin). Also expect Exact Words and You Didn't Ask to be employed against the Faust. Don't be surprised if the Devil pulls out a Comically Wordy Contract.

Compare Bargain with Heaven, which this trope originated as an Inversion of, but which is largely forgotten in the mainstream, but still very much in use in some contexts. Compare also Reasoning with God. For the occasions when the Devil comes out behind, see Did You Just Scam Cthulhu?. See also Evil Is Not a Toy, which this trope overlaps with. These types of deals are often Rash Promises, if the characters involved swear to honor their bargain without actually thinking through what they're doing.

Please note that this trope is about deals with the actual devil, or other demonic beings. A deal with a really evil but otherwise standard (meaning: not demonic) villain may be called a "Deal with the devil" as an analogy, but it's not an example; see Enemy Mine for those cases.

Fry makes a deal with the Robot Devil, exchanging his hands in exchange for a "random" robot's hands so that he can play the Holophonor well. Unfortunately for the Robot Devil, his attempt to rig the Wheel of Robots to select Bender backfires and selects himself instead.

Fry makes a deal with the Robot Devil, exchanging his hands in exchange for a "random" robot's hands so that he can play the Holophonor well. Unfortunately for the Robot Devil, his attempt to rig the Wheel of Robots to select Bender backfires and selects himself instead.