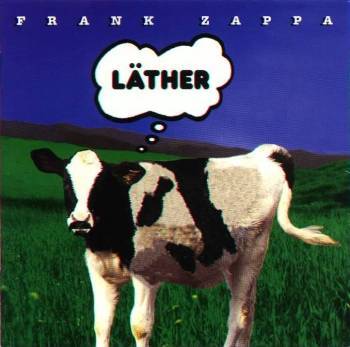 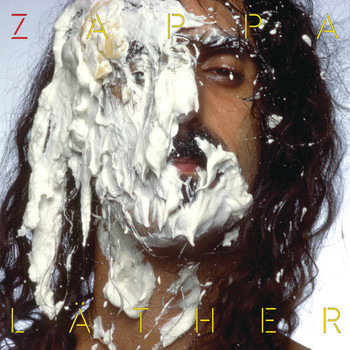 Cover of the 2012 reissue
Advertisement:

Läther (pronounced "leather") is a 1996 posthumous triple album by Frank Zappa. It was a project he wanted to make for nearly 20 years, but his idea was halted in 1977 due to legal troubles with his record label Warner (Bros.) Records and his former manager Herb Cohen. At the time, Zappa was contractually obligated to make four albums for them; Zappa, having quickly grown to detest his contract with Warner and hoping to get out of it as quickly as possible, came to the big suits with the idea of a quadruple-album. The folks at Warner, however, weren't keen on selling something that ludicrously long, and instead released the material as four separate albums: Zappa in New York (1977), Studio Tan (1978), Sleep Dirt (1979) and Orchestral Favorites (1979). Only the first one was produced according to his vision, but still Executive Meddling caused Warner to censor much of the material and change the tracklist as a result. Zappa sued, and the three other albums were released without his permission during the ensuing legal battle.

Zappa tried to find another label willing to release his full four-LP album, but Warner prevented this, claiming to own the rights. Legally unable to release new albums and forced to make a living by touring, Zappa did something that for the time was quite audacious and unprecedented. He went to a radio station in Pasadena, California and allowed them to broadcast Läther in its entirety from a test-pressing made that same year. Zappa encouraged listeners to tape the album from the radio, well aware that he did bootleggers a favor; Jean-Michel Jarre would pull a similar stunt six years later with his sixth studio album Music for Supermarkets, with the added incentive of destroying the master tapes and plates after his own broadcast (Jarre, however, had no legal quagmires to worry about).

In 1993, Zappa died of prostate cancer, but three years later, Läther was finally released as a triple-CD set by Rykodisc according to his original vision, the Zappa estate having finally gotten the rights to the album and recovered the original master tapes by that point. For those people already owning the bootleg LP and/or any of the four albums Warner Bros. cobbled it into, bonus tracks were added: "Duck Duck Goose", "Down in de Dew", a remix of "Regyptian Strut", "Leather Goods", "Revenge of the Knick Knack People" and "Time Is Money". Most of these tracks were previously unreleased, save for "Time is Money" (first included on Sleep Dirt); "Regyptian Strut (1993)" is technically a previously unreleased track in the sense that the remix was created specifically for the 1996 release of Läther, but the original track (which opens Läther) was, like "Time is Money", first released on Sleep Dirt.

In 2012, the album was reissued as part of the Zappa Family Trust's massive remastering campaign, this time without the last four bonus tracks and with a new set of artwork based more closely on Zappa's intended cover art (the artwork Zappa planned did get completed, but was ultimately used for Joe's Garage in 1979). Like the 1996 release, the 2012 reissue is spread across 3 discs, though some have suggested that it would fit on two CDs just fine.

The 2012 reissue is still on three CDs despite the fact that, without the bonus tracks, the album would have been possible to release on two CDs, with sides A-D on the first CD and sides E-H on the second. However, despite the CDDA standard allowing for nearly 80 minutes worth of audio on a disc, many manufacturers will only guarantee up to 79, so this may be the reason the album was still pressed on three discs; disc two in a hypothetical 2-CD edition would run to 79:13.