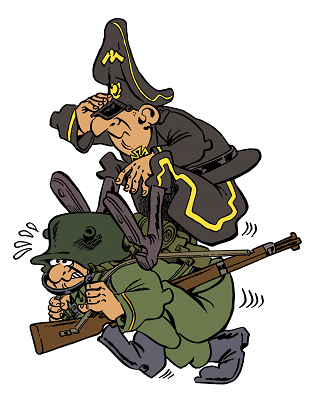 "Zis damned military service vill haff to end sometime. I've grown tired of hafing to say 'Yes, sir' to anyone with a higher ranken. I kan barely vait to return to being an anonymous civilian and being able to zay 'Yes, sir' to any of my superiors..."
— Anonymous Soldier
Advertisement:

Sturmtruppen is a popular and succesful satiric comic, written and drawn by Bonvi (real name: Franco Bonvicini). They started as four-frame comic strips back in 1968 and slowly evolved into full-sized collector books up to 1990s, gathering something like 6000 strips in total.

The comic focus on the life and misadventures of an anonymous German battalion during (supposedly) World War II, showing the daily life, problems and joys of the various, anonymous soldiers and a small cast of fixed characters. Some strips form story arcs that deals with several, hilarious events, sometimes mundane (a maniac sniper soldier, die-hard lices, an attempted "extermination" of a Jewish prisoner) sometimes crazier (a deluge that turns the trench in ponds, a Demonic Possession and a soldier who appears to be the Messiah).

The whole thing comes out as an anti-war comic and is filled with criticism against the "blind obedience to authority'', the absurdity of war and military bureaucracy (Bonvi was an anarchist and proud of it), and the implications that military and civilian aren't so different.

There are two film adaptations (one of which starring Bonvi himself) which, however, weren't well received by everyone.