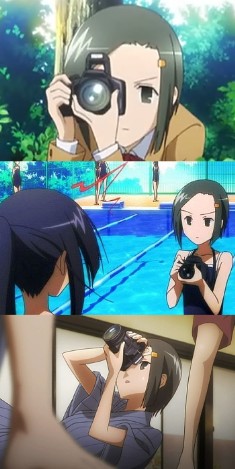 Some characters use a camera. These characters love their camera. They'll have the device with them everywhere they go and they'll use it well, usually sticking it in the most unwelcome of places - they'll take the most inane pictures they can, record everything they see or all of the above (maybe even at the risk of life or limb). Something embarrassing happens? They'll snap a shot. Important plot event? They caught it on tape. You can always expect this character to wear their camera on their sleeve for any important or non-important moment that may arise, probably becoming uncomfortable without the object at near. It's possible that they derive some kind of strange pleasure from watching people, though it's best not to get into that.

On the bright side, they'll provide the scrapbook Montage of happy times near the end of the series. They themselves might get annoyed about being caught on film or having their picture taken. Expect one of the cast to use this to their advantage at some point.

An off-duty Intrepid Reporter tends to fall into this. Sometimes referred to as a shutterbug.

Because this character is often a budding film or media student, they are very likely to be an Author Avatar of the production's writer, director, or producer.

They will almost always take a Convenient Photograph at some point.

See also the Japanese Tourist, who will more often than not be one of these. For the darker side of this trope, see The Peeping Tom. Related to Selfie Fiend, which is about someone who loves taking pictures of themselves.