A life lived in fear is a life half-lived. 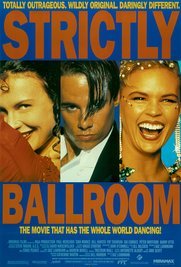 Strictly Ballroom is a 1992 Australian ballroom dance film. Young Scott Hastings (Paul Mercurio) has the makings of a superb dancer, and he's being groomed to win the coveted Pan-Pacific Latin Championships. Secretly, however, he longs to try some new, original steps in his dancing. When the authorities of the ballroom dance world (his mum Shirley, his uncle Les, and local ballroom head honcho Barry Fife) discover this, they pressure him to conform. But then he meets ugly duckling dance student Fran (Tara Morice), who thinks he should follow his dreams—and offers to dance with him. Though initially scornful, Scott agrees. But the powers that be aren't just going to let him do his crazy, crowd-pleasing steps without a struggle. After all, it's been tried before, and ruthlessly dealt with. And Barry Fife will do almost anything to ensure things remain...strictly ballroom.
Advertisement:

Strictly Ballroom was directed by Baz Luhrmann of Moulin Rouge! and Australia fame and is the first in his Red Curtain Trilogy (the other two are William Shakespeare's Romeo + Juliet and Moulin Rouge). It's the Australian chick flick (Dirty Dancing? What's that?), and its climactic dance scene finds its way onto most Best Movie Dance Scene lists.