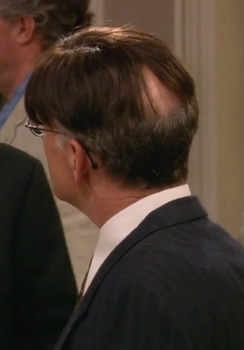 When you want to look ten years younger, there's a small price toupee.
"When he was playing non-Bond roles in the '70s and '80s, he freely showed off his real hairline, but I guess they figured no-one would buy a James Bond with a receding hairline. But come on, who are they trying to fool? What, do they think nobody saw Outland? Do they think no one saw Five Days One Summer? Do they think nobody went to see Zardoz? Uh... you know what, forget I said anything."
— The Agony Booth on Sean Connery in Never Say Never Again
Advertisement:

The ridiculously bad and often obvious toupee that adorns the head of a male character in the midst of a Hollywood Mid-Life Crisis, to show off his vanity and reveal his desire to maintain a facade of authority or manliness. (It might not even have to be an incredibly bad toupee but one revealed comically to such an end.)

While this is mainly a comedic trope, it might occasionally be Played for Drama if the character is wearing a cheap wig/toupee due to chemotherapy or a horrific accident that cost the victim his or her hair (like a fire or a chemical mishap).

For other types of fake hair, see Fake-Hair Drama. Likely to end in a Hairstyle Malfunction. Conversely, if someone's real hair looks like this, that's Mistaken for Fake Hair.

Don gets his dodgy toupee knocked off during the match (complete with a "splat" sound effect!), which pisses him off.

Don gets his dodgy toupee knocked off during the match (complete with a "splat" sound effect!), which pisses him off.