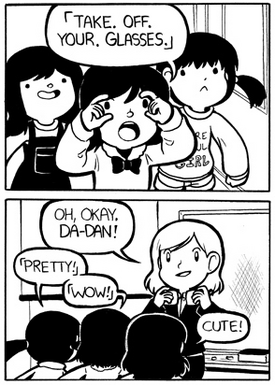 "Are you saying I'm usually hideous!?"

The typical Hollywood perception of wearing glasses is that they are nerdy, homely, or otherwise undesirable in various ways.

These ways could include the "sex appeal" department, and it could also include the strangely instantaneous deletion of glasses from the face of any up-and-coming character in fiction shows. Depending on your personal preference, this could be part of an Unnecessary Makeover. Always the first step in a Makeover Montage.

The vision problems that presumably required them to wear glasses in the first place are seldom addressed, but if it's a long-term change, they might make some mention of contact lenses at some point. The opposite may occur as well, but this is usually to show that the character was Beautiful All Along. Sometimes the character will mention that they only need the glasses for minor vision correction and can see well enough without them. Strangely a character's eyesight will sometimes change to whatever is convenient for the situation.

Pretty much, if "the glasses must go," then the example must go here.

A common step in a Beautiful All Along transformation. Also see The Glasses Come Off, when the glasses are ditched so the character can be more badass. Recently, an "Evil Through and Through" variation has started occurring in anime, where hidden villains remove their glasses to show that... well, yes, they are beautiful all along, but they don't have to hide their intentions anymore (Aizen is a famous example).

Some people really do find glasses sexy in real life, and thus get a little annoyed when this happens, considering it an Unnecessary Makeover. There is even a large following specifically for this in fiction, and of course there are plenty of pornographic websites dedicated to people wearing glasses that can be found without much effort.

A common way to avert this one is to turn the character into a Badass Bookworm.

A Sister Trope to Letting Her Hair Down. Contrast with Bespectacled Cutie and Glasses Are Sexy. Also, don't confuse this trope with The Glasses Come Off.

Alternative Title(s): The Glasses Got To Go