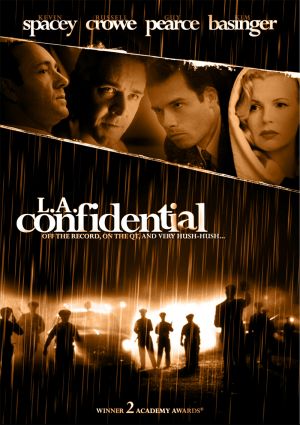 "This is the City of Angels and you haven't got any wings."
"Remember, dear readers, you heard it here first. Off the record, on the Q.T. and very [whispers] Hush-Hush."
— Sid Hudgens

There is a mass murder at The Nite Owl restaurant, and one of the people killed is a former LAPD officer. Three different LAPD detectives with different personalities, wife-basher-basher Bud White (Russell Crowe), straight cop Edmund Exley (Guy Pearce), and publicity-hungry Jack Vincennes (Kevin Spacey) all get caught up in the case, which turns out be part of the power struggle in organized crime after Real Life mobster Mickey Cohen is imprisoned for income tax evasion.

A 1990 novel by James Ellroy, L.A. Confidential was given a 1997 film adaptation directed by Curtis Hanson. Also in the cast are Kim Basinger, James Cromwell, Danny DeVito, and David Strathairn. The screenplay by Hanson and Brian Helgeland greatly condensed the plot and time frames of the book, but was widely praised for keeping almost all of the drama and noir feel.

Hanson and Helgeland won the Academy Award for Best Adapted Script, and Basinger won Best Supporting Actress. The film was nominated in several other categories (including Best Picture) but lost every one to the juggernaut that was Titanic.

HBO commissioned a pilot for a TV adaptation in 2003, but opted not to go ahead with the series. In 2018 CBS decided to try again and filmed a pilot episode, but the network decided not to pick up the series.

For the novel this was adapted from, check out L.A. Confidential.

Remember, dear tropers, you read these tropes first. Off the Internet, on the keyboard, and very Hush-Hush.