Mistaken for an Imposter 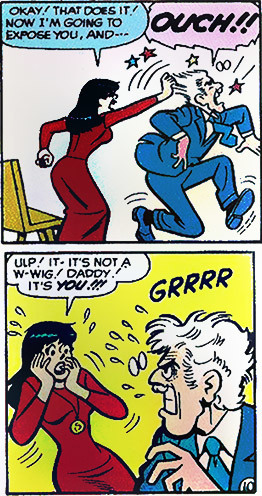 Betty: I can't imagine what got Veronica tonight; she was horrible to her father! She just wasn't herself!
Archie: Neither was her father!
"That's not your mother, it's a MAN, baby! ...Why! Won't! This wig! Come off?!"
— Austin Powers, Austin Powers: International Man of Mystery
Advertisement:

Yesterday, Alice was pranked by Bob, who came to work dressed as Superdude. Today, the real Superdude shows up unannounced. Alice sees Superdude and assumes it's Bob again. She says, "Ha, Ha, nice try Bob!" and tries to pull off his mask.

Basically whenever a celebrity, superhero, villain, alien, monster, etc. appears, but other characters who see it are not unusually excited, surprised, or frightened, because they automatically assume it's a hoax, on the basis that another character tried to do something like that earlier.

Elmer Fudd thinks that the sheriff is Bugs Bunny in disguise.

Alternative Title(s): Mistaken For An Impostor

Elmer Fudd thinks that the sheriff is Bugs Bunny in disguise.