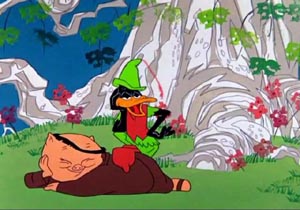 "How jolly can you get?"
Advertisement:

"Robin Hood Daffy" is a 1958 Looney Tunes Animated Short starring Daffy Duck which, as the title implies, casts the acerbic-but-always-lovable fowl in the role of the legendary bandit Robin Hood. The plot involves Daffy's inevitably inept attempts to prove his identity to an aloof friar (played by Porky Pig), by stealing a bag of gold from a wealthy traveller.

Not to be confused with another Looney Tunes short "Rabbit Hood" (1949), which stars Bugs Bunny.