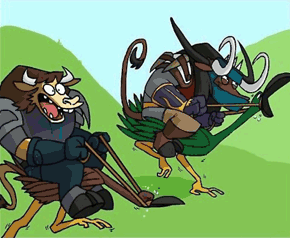 Not from an episode of Cow and Chicken.
[The planet Vogsphere had] "... elegant gazellelike creatures with silken coats and dewey eyes which the Vogons would catch and sit on. They were no use as transport because their backs would snap instantly, but the Vogons sat on them anyways."
— The Hitchhiker's Guide to the Galaxy
Advertisement:

Quite simply, this is the instance of a very large rider riding on a very small animal. It's often spotted in comedies as a way of providing comic relief if the rider is too intimidating to suit the tone of the story. The implications of this situation are very rarely discussed; as far as anyone will see, the mount will never tire out from carrying such a heavy weight or appear harmed in any way.

A variation is to have the person riding a tiny vehicle instead.