Motivation on a Stick 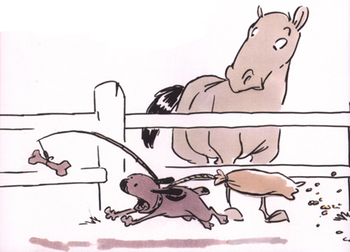 He'll get that bone as soon as the chickens are properly fed.
Advertisement:

A character dangles some kind of treat on a stick in front of an animal, or even in front of another character, similar to fishing with a rod, line, and bait. This is usually done in order to trick the subject into going somewhere at a fast pace (or sometimes, to run on a treadmill or hamster wheel). The classic example is "carrot and stick" dangled before a horse, mule, or donkey to get it to pull a cart.

Related to Food as Bribe and X on a Stick. See also Food Interrogation. Will often involve a Trademark Favorite Food, or something from the Stock Animal Diet. Cash Lure is a variation involving money.

The problem of the bait swinging on the string, so that the target can simply grab it, is never mentioned (sometimes this is justified, since they don't have hands).