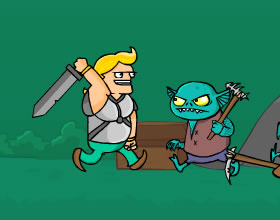 Von Wanst fights a goblin.
Lucky Tower is a series of Adobe Flash games. You play as Von Wanst, a golden-haired knight of bravery and manliness who is on a quest for treasure. He is also incredibly stupid and dense, not realizing just how badly he's messing things up or missing obvious clues.

The first game was released

in 2010, and has the hero going through a tower simply trying to find treasure or escape, learning about the dangers of the tower along the way.

in 2012 and is more in-depth, carrying more unique NPCs, areas, and humor than the first. It covers the knight's quest first to help out the king, and then to find treasure buried in a tomb. It's also a Prequel to the first Lucky Tower, as in the ending, the knight can get teleported to the top of said tower.

Tropes in these games are: