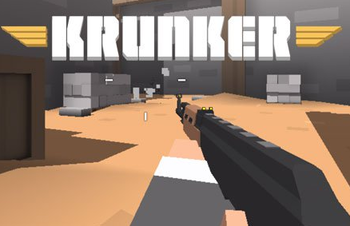 is a free Web Game First-Person Shooter, created by the swiss developer Yendis Entertainment. It acts as a Spiritual Successor to their earlier online shooters, Vertix.io and Karnage.io, and uses many of the same character classes. The key difference is that unlike a typical .io Game, it is fully 3D, though it uses voxel-based graphics reminiscent of Minecraft in order to reduce the browser workload and ensure the game is playable even on very old computers.
Advertisement:

It entered open beta on May 20th, 2018, and hit version 1.0 on January 29th, 2019, though the development is on-going. It is currently a notable mix of gameplay styles and influences: the main default map, burg, is a a remake (or demake?) of the iconic De_Dust from Counter-Strike 1.6; the fast-paced movement approaches that of arena shooters like Quake and Unreal Tournament; the class system resembles early Team Fortress 2, while the Regenerating Health and ADS-focused weapon physics remind most people of Call of Duty.

The game supports a clan system, and there's already genuine rivalry, with dedicated clan Discords, a Clan Central used to set up Clan War matches, and the tournaments with a series of ranking matches. It is also easy to mod, and there are already hundreds of playable custom maps

, with some of the most notable collected in the wiki's Map List

. There is also a variety of game modes, though most are only available on the aforementioned custom maps:

The game is undergoing regular changes, so some finer details on this page may become out of date.