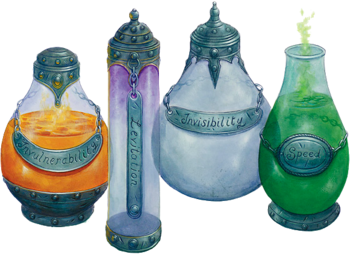 Magic potions are a variety of drinks, elixirs, philters, and brews that produce magical effects when drunk.
Advertisement:

Magic potions' main draw in fiction is twofold. Firstly, they act as essentially bottled spells — potions with desired effects can be made whenever one has time and the chance to do so and can be stored away until they are needed. When their power is wanted, the potion is quickly drunk and its magic becomes active. Secondly, potions can be used, and often made, by people who cannot otherwise use magic. Typically, potion-making takes its effectiveness from inherent properties of the ingredients and processes used to magic the potion, without requiring active spellcasting; thus, even someone who cannot cast "true" magic can make potions if they know what to mix and how to prepare it. Even when magic is needed to make a potion, it's not needed to use it — thus, regular old Muggles can simply buy potions from a wizard to use as needed later.

Magic potions can have a tremendous number of effects. Some of the most common variants are the Healing Potion, which closes wounds and restores lost health, and the Love Potion. Also common are potions which make you tougher or faster, or which give resistance to all or certain types of damage. Certain potions may be actively harmful, but may still be handy if you can get the other guy to drink them. They tend to be named very prosaically after their effects, usually as either "X elixir/potion" or "elixir/potion of X".

Eye of Newt is often an important ingredient in these brews. Many potions have extensive, complicated recipes with long lists of abstruse ingredients, which can range from easily-accessed bits of backyard wildlife and woodland Healing Herbs to a Flower from the Mountaintop or the viscera of rare monsters to abstract Insubstantial Ingredients. Generally speaking, a potion's power tends to relate to the rarity and potency of its ingredients; a mix of common bugs and herbs will be effective but not mind-blowing, while the choicest and most powerful potions will require rare and expensive reagents. The relationship between specific ingredients and the potion's effects varies. Sometimes no specific link exists, and the potion will be stated to derive its powers from substances and properties that are present in the materials but not visible to the naked eye. Other times there will be more obvious links — for instance frog legs for a potion that makes you a good swimmer or leaper, a love letter for a love potion, and so on.

The actual brewing process is sometimes trivially easy, especially in video games, but in other media tends to be long and complex, and usually delicate. It's most commonly achieved by stirring everything into a big, bubbling cauldron, mixing and heating everything in a usually very specific sequence; some works drop this convention in favor of distilling potions through complex series of alembics, retorts, and that thing you get when you hook a whole bunch of them together. In either case, messing up the process, such as by adding the wrong ingredient or the right one at the wrong time, or even just jostling the pot, will result in a useless mass of goop... or an explosion. The explosion is more likely.

In appearance, potions tend to have one of two looks. Sometimes, they will be brightly-colored, often fizzy, bubbly, or containing various bobbing shapes; their taste will either be acceptable or unremarkable. Other times they will be vile, chunky purees like what you'd expect a newt, weed, and insect soup to look like, sometimes with things like eyes and dead insects still visible inside, to be choked down in a hurry for the sake of their conferred power.

Supertrope of Bottled Heroic Resolve, Elixir of Life, Healing Potion, Love Potion, and Mana Potion. Super Serum is in many ways a pulp and science fiction version of this. This is often a part of why Alchemy Is Magic. Potions of this sort are often brewed by a Witch Classic in a Magic Cauldron. In games, this is often represented through a Potion-Brewing Mechanic. These often act as a one-time Limited-Use Magical Device.