Recap / Asterix and the Great Divide 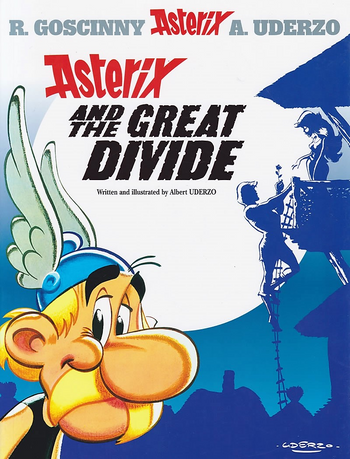 The Great Divide is the first Asterix album to be fully handled by Albert Uderzo (both writing and drawing) after the death of René Goscinny, and evokes the Berlin Wall.
Advertisement:

The twenty-fifth Asterix volume, the first to be written as well as drawn by Albert Uderzo, opens in a Gaulish village whose inhabitants are divided by a large ditch and a dispute in the leadership. The left half support Cleverdix, and the right half follow Majestix. All attempts to settle the argument fail, leaving Cleverdix's son Histrionix and Majestix's daughter Melodrama, who are in love with each other, to lament their plight. However, Codfix, Majestix's right-hand man, claims to have a solution; if he gets Melodrama's hand in marriage, he'll get the local Romans to aid Majestix. While Majestix isn't too keen on Roman interference, he agrees if the Romans will back off afterwards. Melodrama informs Histrionix of this, and on the advice of his father, Histrionix goes to Asterix's village for help. Learning of the plight, Asterix, Obelix, and Getafix agree to protect the village from the Romans and help resolve the divide.

Codfix goes to the local Legionary camp, and learns that there's a labor shortage. He offers the Centurion Cleverdix and his followers as slaves in exchange for making Majestix chief of their village. While not wanting to break the Pax Romana, the centurion gives in. Asterix's crew and the Romans arrive at the village at the same time, but Majestix is outraged when he learns of the deal Codfix struck, and declares that no Gauls shall be Roman slaves. Angry at what he perceives to be a false promise, the centurion has Majestix and his men taken as prisoners, except for Codfix, who remained in hiding.

Asterix, Obelix, and Getafix decide to infiltrate the Roman camp, since they're not as well known in these parts, and offer themselves up as slaves. The sentry makes the mistake of calling Obelix fat and gets his lights punched out. Luckily, Getafix has a healing potion ready - it not only heals wounds, but also makes the taker forget what injured them. However, the druid absent-mindedly leaves the bottle on the grass, and Codfix, who followed the heroes secretly, scoops it up. In the camp, Getafix brews a "Gaulish Soup", and Centurion, suspecting poison, has Majestix and his men sample it. Of course, the soup is Magic Potion and the camp is in ruins shortly after. Once the heroic Gauls have left, the decidedly unheroic Codfix gives the Centurion the healing potion, causing the Roman to forget their injuries or who Codfix is. When he sees the damaged camp, the centurion believes that the Gauls have made an unprovoked attack, and decides to retaliate.

At the Divided Village, Getafix brews a second cauldron of Magic Potion, and it is placed in a house built over the ditch (or, rather, a house through which the ditch was built!), with Asterix placed on guard duty. At night, though, Codfix sneaks into the village and takes Asterix by surprise, knocking our hero out and stealing the cauldron. The next morning, the Romans, having taken the Magic Potion, begin their assault. However, the mixture of different potions in their bodies have side-effects, causing them to inflate like balloons and then shrink in size. The Romans flee, but in the chaos Codfix has kidnapped Melodrama, leaving a note demanding a ransom of one hundred pounds of gold for her safety. With Dogmatix sniffing out the trail, Asterix, Obelix, and Histrionix go to the rescue.

The trail leads to a river, where Codfix and Melodrama have met up with the Pirates, having given up on deep-sea looting. It doesn't take long before a fight between Histrionix and Codfix breaks out, though with their potion-powered strength only the ship is damaged. However, Codfix's magic strength runs out just before Histrionix, and the deceitful Gaul is punched all the way into the Legionary camp, whose Centurion has not forgotten the fishy Gaul this time.

Back at the village, the celebration of Melodrama's safe return is soured by the dispute of leadership. The two would-be chiefs have a duel to decide things, with Asterix as referee, but they're so evenly matched that it goes on through the night. Come morning, both men have fallen asleep standing up, but Asterix has a compromise - Histrionix shall be chief, with Melodrama as his wife! Everyone approves, and with the dispute settled, Majestix and Cleverdix become friends. The nearby river is diverted to fill the divide, the Star-Crossed Lovers have their wedding, and Codfix, most fittingly, has become the Roman camp's sole drudge, doing menial chores. All of them.