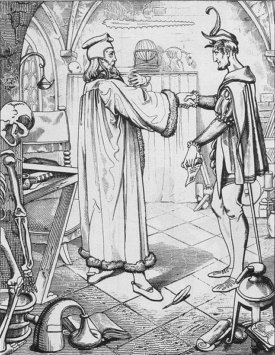 The first (and much better known) part of the Faust duology by Johann Wolfgang von Goethe about the eponymous sorcerer and his deal with the devil.

Mephistopheles, a powerful spirit from down below, pays a visit to Heaven to have a chit-chat with God. Disagreeing on whether humanity's struggle for knowledge is futile or not, their exchange of views ends in a bet: Mephistopheles has free rein to tempt the eminent scholar Faust to stray from the path to salvation destined to him; the bet will be won if he succeeds in subjecting Faust to eternal damnation.

Down below on Earth, the immensely learned Faust is moping lonely in his study. All his learning has only left him disillusioned, nor has it earned him material comfort. Not even his commitment to magic has revealed him the answers he seeks. Thus, Mephistopheles has little trouble in persuading him to a deal: Mephistopheles will serve him on Earth, but should Faust ever experience a moment of perfect contentment, he will have lost his soul to Mephistopheles and presently follow him to Hell.

Faust approves and signs the contract with his blood. And off they go on an uncurbed tour to debauchery, in the course of which Faust gets rejuvenated and the hots for the innocent young Gretchen. Faust pressures Mephistopheles to get Gretchen into bed with him, which proves tricky business as Gretchen is annoyingly pious. Yet Mephistopheles realizes that Gretchen may just be the key that could win him the wager and Faust’s soul.

Tropes in Faust I: