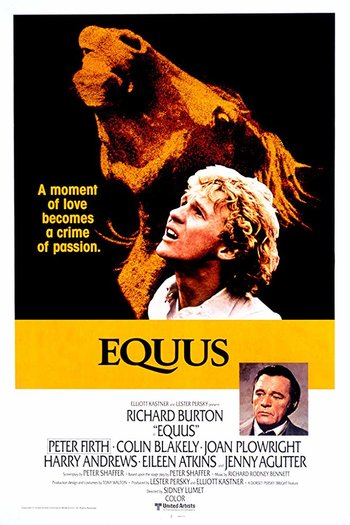 "Passion, you see, can be destroyed by a doctor. It cannot be created."
— Martin Dysart
Advertisement:

A 1973 play by Peter Shaffer, Equus was adapted by its author into a 1977 film directed by Sidney Lumet and starring Richard Burton and Peter Firth.

In the play and film, psychiatrist Martin Dysart is called to investigate the case of a stableboy named Alan Strang. Alan, out of a religious and sexual fascination with horses, savagely blinded six horses with a metal spike. As he examines the boy, and his fascination, Dysart starts to have doubts about whether he can really help him, or whether turning people to a "normal" way of thinking is always the right thing to do.