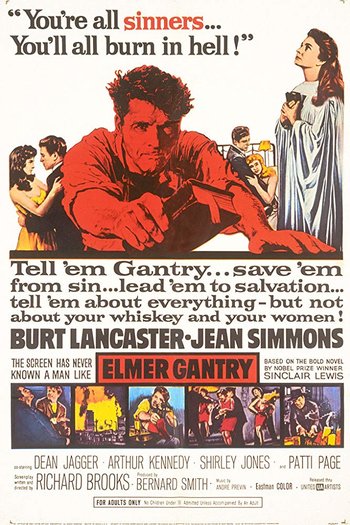 "I have here in my pocket — and thank heaven you can't see them — lewd, dirty, obscene, and I'm ashamed to say this: French postcards. They were sold to me in front of your own innocent high school by a man with a black beard... a foreigner."
— Elmer Gantry
Advertisement:

A novel written by Sinclair Lewis and published in 1927, Elmer Gantry was brought to the screen by director and writer Richard Brooks in 1960. The title role was played by Burt Lancaster, who won an Academy Award along with co-star Shirley Jones (who played Lulu Bains) and Brooks' screenplay. Jean Simmons also starred as Sharon Falconer. There is also a 2007 opera adaptation composed by Robert Aldridge, with libretto by Herschel Garfein.

The novel and and its adaptations feature examples of: