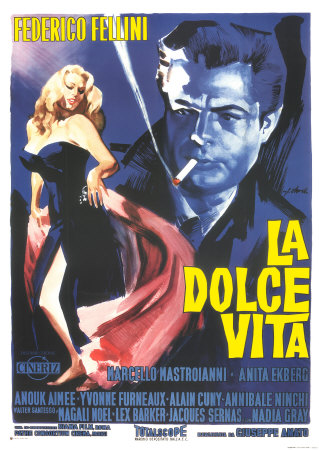 A highly acclaimed 1960 film by Federico Fellini, La Dolce Vita (The Sweet Life) is about some days in the life of gossip journalist Marcello Rubini (Marcello Mastroianni), who has to deal with apparitions of the Madonna, a friend's existential anguish, problems with his girlfriend, a lot of lovers and a highly annoying photographer friend.
Advertisement:

The movie is famous for being considered "immoral" for its presentation of the Roman lifestyle and the obvious Fanservice Fellini provides with the women (though if you were to look at it, you'd probably raise an eyebrow about it,) for its scene of the actress Anita Ekberg bathing in the Trevi Fountain in Rome, for being the Trope Namer for the term Paparazzi, and for being the first film that Roger Ebert ever reviewed.