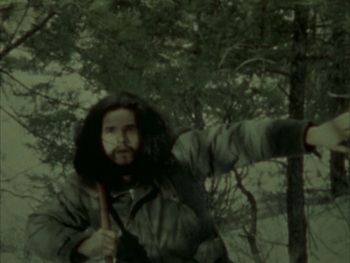 Dog Star Man is an experimental 1964 film by Stan Brakhage.

It was originally made in five parts between 1961 and 1964. Specifically, the film consists of a "Prelude" (25 min), and Parts I, II, III, and IV (30 min, 6 min, 8 min, and 6 min), totaling a 75 minute running time. The parts are typically shown together as a single film. The film has surreal and often incomprehensible imagery, with extreme closeups, shots out of focus, superimpositions, and film that was manually scratched or painted. The story, to the extent that there is one, mostly involves a man and his dog climbing a mountain and chopping down a dead tree. There are also many shots of the sun (the "star" in Dog Star Man), suggesting creation. There are also shots of a woman who engages in sexual intercourse with the man, as well as shots of a crying child, suggesting family and birth.