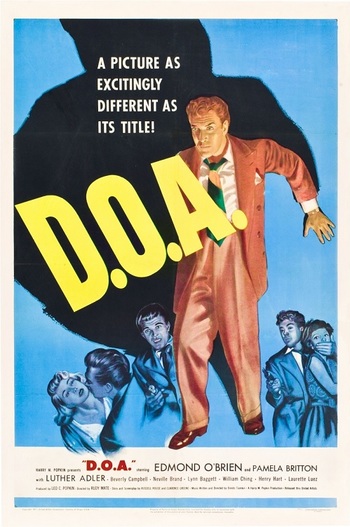 D.O.A., or Dead on Arrival, is a 1949 Film Noir drama directed by Rudolph Maté, starring Edmond O'Brien and Pamela Britton.

The film centers around a man named Frank Bigelow (O'Brien), who must frantically try to find out who slipped him an incurably fatal dose of a rare poison — and why. The plot speeds along as Frank recounts his past events to the police to get help.

Due to a filing error the copyright to the film was not renewed on time, causing it to fall into the Public Domain, and as such it can be downloaded here

, courtesy of the Internet Archive.

Remade in Australia in 1969 as Color Me Dead with the original writers on board. Watch it here

. A very, very loose remake starring Dennis Quaid and Meg Ryan was released in 1988; this is the remake referred to below unless otherwise stated. The 2006 film Crank has a similar plot.

If you're looking for the fighting game, see Dead or Alive.