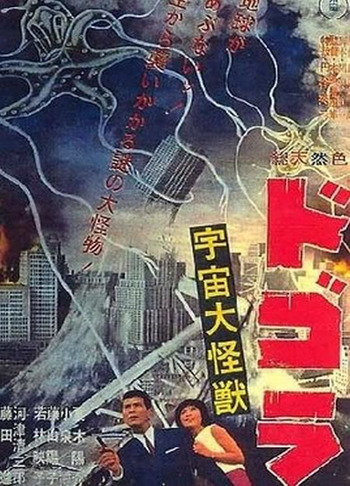 Dogora, a.k.a. Space Monster Dogora and debuted in the US television as Dagora, was one of the last giant monster movies produced by Toho to feature only one monster in its own movie. It was produced and released in Japan in 1964, after Mothra vs. Godzilla, but before Ghidorah, the Three-Headed Monster. 1964 was a very productive year for Toho. Despite the other films in the showa Toho-verse being all connected, the events of Dogora have never been mentioned in any other movie, not even Destroy All Monsters or Godzilla: Final Wars. Because of this, and due to the film's relative obscurity to anyone whose name isn't Sanford, the film's plot will be given a somewhat detailed description below. On a related note, Dogora shares much of the same cast as Ghidorah, albeit in mostly different and unrelated roles.

Dogora is a giant space cloud that eats diamonds. For a synopsis, see the recap page.