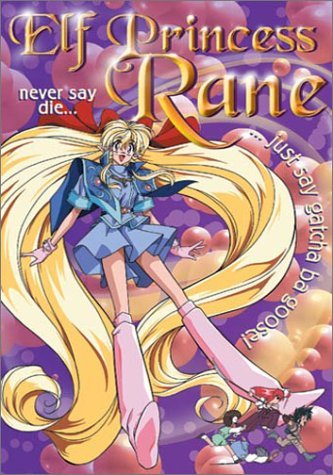 Elf Princess Rane is a 1995 comedy anime OVA produced by KSS and Dangun Pictures known for its extreme silliness and its extremely short length.

As befitting of an extremely wacky comedy, Elf Princess Rane's plot is kind of a mess. Go, an amateur treasure hunter, is searching for the legendary Salamander. During his quest, he meets up with an Elf named Rane who is seeking the Four Treasures of Heart. Add in Go's childhood friend Mari who befriends her own fairy in Leen, an evil corporation who seeks to turn Go's hometown into an amusement park, and you have a lot of plot elements that end up being buried under a tidal wave of jokes, random stuff, and overall zaniness.

This series lasted for two episodes, whereupon the animators ran out of budget. In the last 20 seconds of the second episode, one of the characters gets a full-screen face shot to beg for monetary donations to continue the series. Whether this scene is sincere or just another joke, or course, is for you to decide.