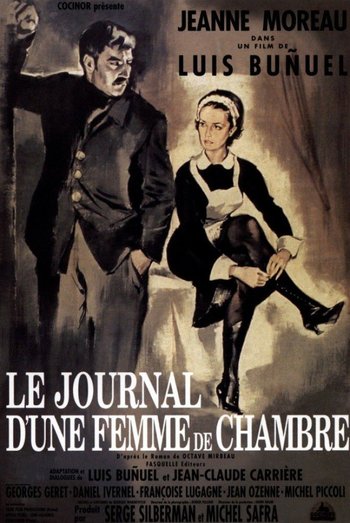 Diary of a Chambermaid (in French Le Journal d'une femme de chambre, in Italian Il diario di una cameriera) is a 1964 French-Italian film directed by Luis Buñuel and starring Jeanne Moreau and Michel Piccoli. It is based on the 1900 novel of the same name by Octave Mirbeau, previously adapted to the screen by Jean Renoir in 1946.

In the 1930s, Célestine (Moreau) is hired as a chambermaid by a rich family. She arrives in their chateau in the country, where she meets Monsieur Rabour (Jean Ozenne), the elderly master of the house who is also a shoe fetishist; his frigid daughter, Madame Monteil (Françoise Lugagne), and her husband, Monsieur Monteil (Piccoli); and the rest of the household servants, including the nationalist and violent groom Joseph (Georges Géret).

Diary of a Chambermaid provides examples of: