Film / Simon of the Desert 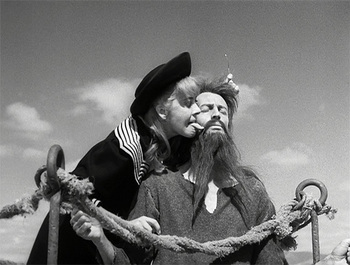 This never happened to John the Baptist.

Simon of the Desert is a 1965 featurette (45 minutes) directed by Luis Buñuel.

In the fifth century, an ascetic named Simon stands on a pillar about ten feet high in the middle of the desert, because that's the sort of thing ascetics do. The local peasants come to him to beg for miracles. The local priests come to pray and seek guidance from him. A prosperous merchant builds him a taller tower, closer to 25 feet high. His mother begs him to come down, but Simon, believing he is on a Mission from God, refuses.

Eventually Simon is approached by a beautiful woman (Silvia Pinal). He immediately recognizes her as Satan. Satan, who seems to find Simon's whole stand-on-a-pillar routine ridiculous, starts trying to tempt him to come down.

Silvia Pinal previously starred in Buñuel features Viridiana and The Exterminating Angel. There are differing explanations for why this film is so short. Buñuel apparently said later that he simply ran out of money. Pinal later insisted that Simon of the Desert was always supposed to be a featurette, initially planned as part of an Anthology Film, and that it was released separately after the other two short films in the anthology were never made.