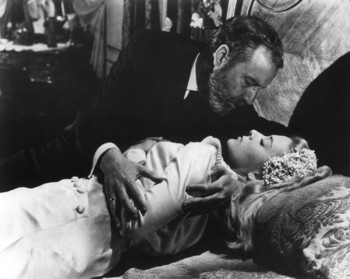 Viridiana (Pinal) is a novitiate nun who is about to take her vows. Since she is about to be shut up within a convent forever, the Mother Superior urges her to pay a last visit to her only living relative, her uncle Don Jaime. She barely knows him but he paid for her education, so she reluctantly complies.

Viridiana travels to her uncle's estate and, after meeting him, tells Don Jaime that she feels nothing for him and that it's too late for them to have a relationship. Don Jaime for his part is shocked at Viridiana's strong resemblance to his late wife, who died of a heart attack on their wedding night. Don Jaime cajoles Viridiana into putting on his wife's wedding dress, then begs her to stay at the mansion and marry him. A horrified Viridiana refuses, but Don Jaime has drugged her coffee.

Tragedy ensues. Viridiana meets Don Jaime's long-lost son Jorge played by Francisco Rabal who was actually only 9 years younger than Ferdando Rey. Viridiana seeks to do good deeds, and turns an outbuilding of the estate into a dormitory for the local homeless—but that ends in disaster as well.