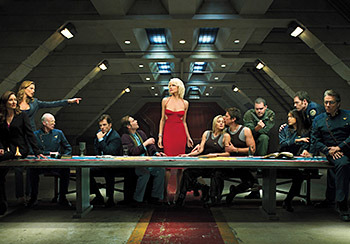 Totally coincidental arrangement, honest...
"Okay, everyone who wants to be in the picture, go to the other side of the table. Hold it..."
— Leonardo, History of the World Part I
Advertisement:

Imitating Leonardo da Vinci's painting The Last Supper, often for promotional art. This works for a variety of different plots or events. If there is a character who is an example (or a subversion, or an ironic inversion) of a Messianic Archetype, or otherwise has some kind of plot-related parallel with the story of the betrayal of Christ, he or she will be placed in Jesus' position, frequently complete with downcast eyes and spread arms. The scene itself often has some thematic connection to the biblical Last Supper, whether it is a group shot of the series' team with a betrayer in their midst, or a gathering of friends that is a metaphorical "last supper" (like a group of coworkers planning to go their separate ways), a leader and his/her followers or supporters, or foreshadowing the death/persecution of the character in Jesus's spot.

Since Leonardo's painting depicts the disciples' reactions to hearing that one of them will betray Jesus, the character placed in the "Judas Iscariot" slot (elbow on the table, second to the viewer's left from Jesus) may be a hint to viewers.

This is actually Truth in Television; artists have made quite a few versions of The Last Supper, many of which have been viewed by the public as in bad taste (or worse). Technically, you can't truly accuse someone who does this of "stealing" (Leonardo's works are not copyrighted) at least in any legal way.

The Last Supper scene from the 1970 film. Jesus and the apostles freeze in the position on da Vinci's painting.

The Last Supper scene from the 1970 film. Jesus and the apostles freeze in the position on da Vinci's painting.