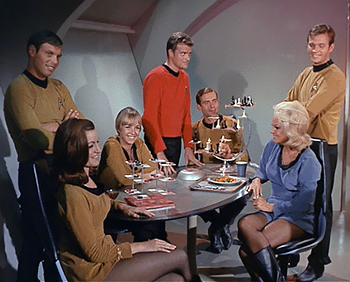 For extra fun: Try to figure out who is playing against whom...
"How come none of us ever sit on that side of the table?"
— Andre Harris, Victorious
Advertisement:

Characters sit in an awkward semi-circle around a table so as to avoid anyone sitting with their backs to the camera/audience.

This is a holdover from the days of theatre, when the audience's perspective was obviously fixed, and thus any actors sitting on that fourth side of the table would have violated two major rules of the stage: never show your back to the audience, and never block the audience's view. It was considered a classic Acceptable Break from Reality.

Nowadays the practice is less often forgiven as the three camera setup becomes less common, and directors have more options for camera placement.

Often achieved in a non-intrusive way by use of The Couch. The camera is presumed to be filming from the location of the television, since no modern family would arrange a room with seats facing away from the television. As a result, this is more intrusive when used in other settings: one wonders how Sam kept Cheers afloat so long with one entire side of the bar unused.

One way to avoid this is via a Round Table Shot; but that tends to be used sparingly so it doesn't get annoying.