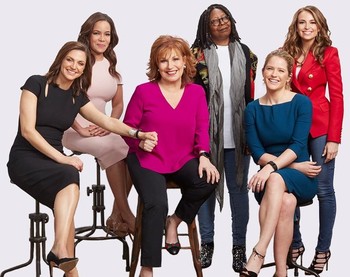 The View is the fourth longest-running daytime talk show in American history, airing weekdays on ABC. It is hosted by a panel of four or five celebrities who engage in news commentary, celebrity gossip, and newsmaker interviews. Usually the celebrities are female but they sometimes have had "guy-day Fridays" in recent years.

This TV show provides examples of the following: