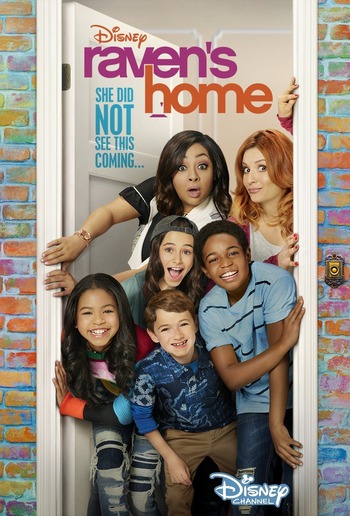 Yep, that's us!
Booker: I just had another one of those things where I saw what was gonna happen before it happens!
Nia: A vision?!
Booker: Yeah, let's call it that from now on.
Advertisement:

The Sequel Series to hit series That's So Raven, features Raven and Chelsea (now both divorced mothers) raising their combined three kids in a Chicago apartment together:

Booker eventually tells Nia about his abilities—at first she doesn't believe him, but later does. Regardless, Booker decides not to tell their mom about his abilities—coincidentally, it turns out that Raven never told her kids about her own psychic abilities.

By Season 2, Raven and Booker finally learn the other is psychic. Now that they know this, Raven resolves to help her son understand his abilities more.

note Which will make this the first Disney Channel series to ever go that long. Some of their shows only go for four seasons at most even if it is popular., with a planned retool featuring only Raven and Booker remaining and seeing them move to Raven's hometown of San Francisco to take care of the former's father Victor after he suffers a major health scare. This retool also introduces Raven's cousin Alice and Booker's new classmates Ivy and Neil, as he once again tries to keep his psychic powers hidden so he can fit in with them. He eventually tells them his secret in "Truth or Hair".

Levi: "Two psychics and neither of you saw this coming?!"
Feedback