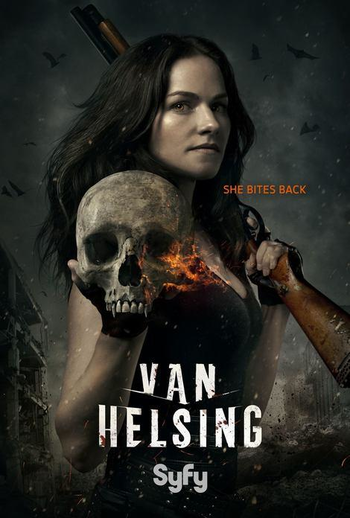 Van Helsing is an American-Canadian television series created by Neil LaBute and starring Kelly Overton. The show is inspired by the Zenescope Entertainment graphic novel series, Helsing, itself loosely based on the character of Abraham Van Helsing from Bram Stoker's Dracula. It first premiered on September 23, 2016 and can be seen on Syfy in the U.S and Netflix in Canada and the United States.

In the wake of a catastrophic volcano eruption, most of the United States becomes blanketed in ash, blocking out the sun and allowing vampires to run free. However, the sudden resurrection of Vanessa Helsing, who has miraculous healing abilities and whose blood can reverse vampirism, offers a hope of resistance. Together with a group of survivors, she tries to make her way through a post-apocalyptic wasteland and find her missing daughter.

Bears no connection to the 2004 film of the same name.