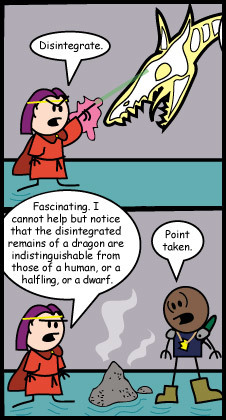 “For you are dust, and to dust you shall return.”
— Genesis 3:19, The Bible
Advertisement:

Dust is a collection of particles shed from just about everything and distributed through everyday movement. That is, it's effectively a waste product of excess and so not easily formed from whole objects or people. Beyond incineration to turn something into ash, the only real way to make whole things into dust is some form of disintegration. This isn't all that common in real life.

However, in media it's quite a fun way of destroying something utterly. Early low-budget special effects techniques were able to create this sort of image, and it has been a popular visual since. When you're shooting a beam at a large block, you would expect it to turn to rubble or some lava-esque state (or just get a hole); it will instead collapse into a pile of dust. Such conversions often will happen to parts of the object which are far away from the beam at the same instant as the spot the beam is actually hitting. It's also one way to present what seems like a very final death or even a kid-friendly, body-less death, or may be what is due to alien biology. If you enjoy Gallows Humor, someone nearby might call out "don't sneeze".

For living creatures, this may occur as a result of a Disintegrator Ray, or as a result of No Immortal Inertia and Rapid Aging. Another possible cause is "dehydration" (see Instant People: Just Add Water!). If done to human beings, can result in Empty Piles of Clothing. Compare Fading Away, where the disappeared character or thing fades away completely. Will often result in Sweeping Ashes.