Fish out of Temporal Water 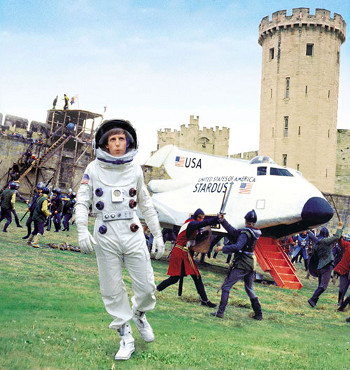 "Greetings. Do kids still say ‘greetings’? I haven't been in this dimension for a really long time."
— Stanford Pines, Gravity Falls
Advertisement:

A Fish out of Water situation that results from characters being placed in an unfamiliar time period. This may be caused by:

In addition, the story will most likely follow one of these scenarios:

Someone from The Present Day ends up in The Future: In this case, the "fish" will be awed by an incredibly wonderful future, be horrified by a dystopian future, enjoy the benefits of a mostly positive future or be surprised by a future that's strange in an unexpected way. Whichever version it is, the future depicted will inevitably end up being completely inaccurate when the year given actually rolls around.

If the story is a comedy, the time-traveller is likely to discover that Ridiculous Future Inflation has occurred. Then there will be the pop culture references that no one understands (Elvis? Who's that?). There will also probably be humorous references to how the celebrities of The Present Day have ended up by then. An amusingly and horrifyingly dated one of these appeared in Back to the Future Part II, which had a newspaper in 2015 make reference to "Queen Diana." (On the amusing side, Elizabeth II was still Queen in 2015... and on the horrifying side, Princess Diana died in 1997, eight years after the film came out.)

If the story is not a comedy (or is a Black Comedy) you get Cold Sleep, Cold Future.

Someone from The Present Day ends up in The Past: This past is usually sometime before the "fish" was born, ranging from about twenty years ago to The Middle Ages. Not that their form of English would be the least bit intelligible to modern-day time-travellers, but hey.

The "fish" will probably make little effort to fit in, awing the locals with A Little Something We Call "Rock and Roll", telling them that This Is My Boomstick and possibly becoming a Blithe Spirit. Apparently it's the sworn duty of all time-travelers to show the people of the past how to be hip in The Present Day. If they get anywhere near a military installation, they'll probably be mistaken for a spy. The "fish" may also describe the future in an ironic way or tell people about things which would have seemed impossible or ridiculous in that era:

The savvy time traveller (or the one who thinks they are) in the past might also decide to be the one who invents velcro only to find that when he return to the future, the fact that they now aren't wealthy like they thought they would be is the least of their problems.

If a Trapped in TV Land situation fits this trope, it will fall into this scenario.

Someone from The Future ends up in The Present Day: In this case, the "fish" will be confused by the simplest things, which are, of course, completely obvious to the audience. They will also likely refer to the newest and most advanced technologies as "quaint". Fortunately, they will have brought back lots of Applied Phlebotinum, just in case there was any doubt that they really were from The Future. They may have a flawed view of The Present Day reality influenced by idealizing revisionism of the historians of The Future, sometimes disenchanted that they lied. The traveler, unless downright awesome at all times, will almost inevitably be dangerously Genre Blind and equally likely to nearly get killed almost as much as the next type. They will also be horrified and disgusted by some of the mundane tropes and conventions until they are carefully explained. "Hot dog? You mean I just ate a..."

Someone from The Past ends up in The Present Day: The humor will result from the "fish" attempting to relate to The Present Day with only the knowledge of a previous time. Naturally, they will make mistakes and/or be awed by things which the audience has come to take for granted. The Values Dissonance between the two eras may come up. This is now its own subtrope — The Future Is Shocking.

If they're from any time after about the midpoint of the Industrial Revolution (when people first began to take for granted that the future will be different from the present), the "surprised by a future that's strange in an unexpected way" trope will probably apply.

If they're from far enough back, their first encounter with a motor vehicle will involve the words "metal demon", or alternately "horseless carriage". They will also be completely unfamiliar with the word "computer" in spite of this being a common retooled word, which once meant someone who does calculations or 'computes' for a living. Not knowing the word "accountant" would be just as unusual.

If the character is from one of the more romanticized time periods, such as the Middle Ages, Antiquity or any age dominated by warriors, princes, kings and Old-School Chivalry, they will regard the people of the present as soft, weak, and uncultured (especially the men) and will often upstage and shame the modern men, winning the present day women over with gallant or gentlemanly behavior. In more recent works, this has however, become more subverted due to the influence of feminism and the historical fact that these time periods look better in fiction than they did in reality.

A character who isn't literally from the past, but somehow deludes himself that he's still living there anyway, is a Disco Dan. A character who neither literally from the past nor holds no delusions that he's living there, but is just more comfortable with the attitudes, mindsets and styles of the past than the present is Born in the Wrong Century

Someone from The Future ends up in The Past: Fairly common Star Trek plot (and cause of some of the best episodes and a couple of the worst). Essentially combines The Present Day to Past and The Future to The Present Day tropes. Thank you for being unusual, Data. Thank goodness he had amnesia.

Someone from The Past ends up in The Future: Also a common Star Trek plot (although not quite as common, and usually done in a more unusual way than straight out time travel. Usually.) Here's looking at you, Sam Clemens.

Someone from The Future ends up in The Future: Can involve either going forward or backwards (but generally backwards). Does your mind hurt yet? Will be generally played for laughs (like somebody complaining that the technology that would be super-advanced to somebody from The Present Day is an antique) or for Continuity-based Fanservice (Trials and Tribble-ations, anyone?)

Someone from The Past ends up in The Past: There's a LOT of Past. Can usually result in one Historical Figure or archtype meeting; befriending or fighting another. Ninjas, Pirates, Napoleon, Hitler, Genghis Khan, Neanderthals, Dinosaurs; etc. Spam with other types for time travel annoyance.

Jean Bison was originally from the 1850's before he was frozen alive in an avalanche.

Jean Bison was originally from the 1850's before he was frozen alive in an avalanche.