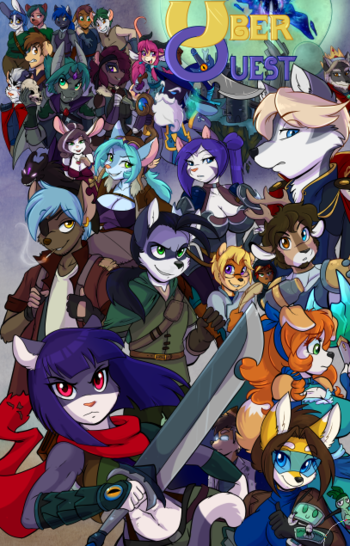 A Ragtag Bunch of Misfits if there ever was one.
"I decided then, I was going to take charge of my own destiny..."
— Sesame, upon becoming a warrior
Advertisement:

Uber Quest is a web-comic that takes place in a realm known as Evyr, a world ruled by magic with a strange past. Inhabited by various races with extraordinary powers and many fantastical creatures and devices. The story follows Sesame, a young warrior who embarks on a quest for answers after her village is raided and her father killed by a mysterious group - looking for powerful artifacts known as 'ubers'.

Sesame runs into various other adventurers along the way: Kibella (also known as "Kibbles"), a kindly mage in training, Farron, a shady merchant and Con-Man, Mason, a weary-yet-sheltered blacksmith, Kylar, a knight and high-ranking veteran, and (strangely enough) Claire, a scientist from seemingly, the future that joined their group through odd circumstances

They join together in a tentative allegiance, unknowing that the questions they ask will have dire consequences.During their adventures, many factions and Kingdoms are at play, all vying for power.

Prince Drayven is the heir to the throne of the Kingdom of Alder, the most powerful nation on Evyr, is trying hard to reign in his ever maddening father King Alphonse. A powerful necromancer, Valmont offers up a deal to help him take back the Kingdom and reign in the chaos, for a price.

An uprising known as the Severance is lead by a rogue sky-pirate and her motley entourage, trying to dismantle Alder's iron grip on the realm.

Meanwhile, a covert group known as Zysa are lead by the enigmatic Omni, seed their own plans.

Sesame's group finds themselves in the midst of the crossfire, unveiling coverups, political intrigue, and the origin of the ubers. All the while Sesame is plagued by ever increasingly cryptic and bizarre lucid dreams.

As tensions rise and they lay on the precipice of a world-war, everyone is in an arms-race to obtain control of the artifacts known as ubers. Whose power not only empowers the strength and abilities of its wielder but supposedly even has the capability to shape and make worlds.