Monster Is a Mommy 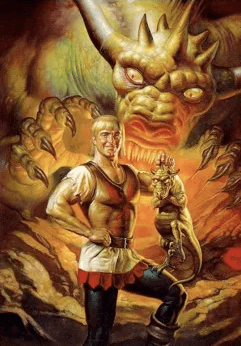 Mother's Child, Boris Vallejo.
"Guess we know why that Deathclaw tracked us all the way from Lynn Woods now. We stole her damn kids. Christ, maybe, maybe if we'd just returned the eggs... [offscreen snarling can be heard]"
— Sergeant Lee's log, Fallout 4
Advertisement:

Some kind of monster is terrorizing folks. After defeating or almost killing it, the cast follows the menace's trail back to its lair.

There it turns out the hostile critter has a very good reason for its actions, such as it was just protecting its cubs/litter. Extra points if they're cute.

Typically, the heroes inform the harassed populace about the creature's motivations, which may involve Shaming the Mob, and a suitable arrangement is arrived at to resolve the situation peacefully. Woe betide the townie or hero who took one of its litter as a Pet Baby Wild Animal, unless it's somehow become attached to them and convinces mommy to spare their life. Nursing a wounded fledgling back to health generally grants you a reprieve from momma's wrath, whether via karma, or because mom's smart enough to understand that you healed her child and grateful that you did (Warning: The vast majority of real life animals are not in fact smart enough to realize this). Sometimes the mom will be grateful enough to help out the person who helped her child(ren). They will almost always exhibit Villainous Parental Instinct.

This trope can be expanded to cover any noble, maternal or protective behavior by an alien or monster that is misunderstood as predatory and/or aggressive.

There's also a fairly common inversion where the heroes battle one or more monsters before discovering the Insect Queen or Monster Progenitor, who is several steps up the Sorting Algorithm of Evil from her offspring — and is now out for revenge...

Compare with It Can Think, when a monster is more intelligent than they seem.

Sea Monster Is a Daddy

The sea monster in Beef's story is actually trying to get to its baby on the other side of the cove. Delmer, however, points out that it's actually a daddy.

Alternative Title(s): Monster Is A Mummy

Sea Monster Is a Daddy

The sea monster in Beef's story is actually trying to get to its baby on the other side of the cove. Delmer, however, points out that it's actually a daddy.