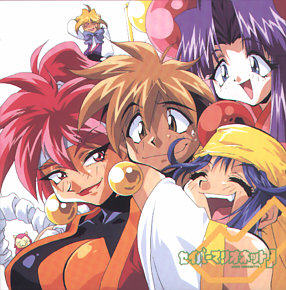 Several centuries after an almost-failed colony attempt, the planet Terra II is a strange place. Its human population is entirely male, born from recombinant DNA and cloning technology, and its hostile surface is home to six widely-separated city-states, each mimicking an earthly culture ranging from medieval Japan to 20th-Century America. Women have not been forgotten among the men of Terra II, though — simple-minded automatons called "marionettes" are built in exclusively female form, and act as servants, entertainers, concubines — and in some cases, infantry troops.

In the city-state of Japoness, which is modeled after Edo-era Japan, industrious orphan Otaru struggles to make ends meet. Too poor to afford a marionette of his own, he runs back and forth through the city trying to scrape up enough cash to live on with a series of odd jobs. In the wake of a mishap during one such job, Otaru finds and awakens Lime — a marionette who acts more like a real person than an automaton, loaded with emotions, curiosity, and an unfortunate tendency to attract trouble.

Otaru soon finds himself the center of a great deal of attention, including (to his shock) that of the shogun. And two more "unusual" marionettes, Cherry and Bloodberry, soon end up in his possession. As a neighboring city-state modeled after Nazi Germany begins gearing up for war with Japoness, Otaru must guide and teach what amounts to three affectionate and rambunctious teenagers — whom he will discover hold within themselves the keys not only to Japoness' long term survival, but to the secrets behind the failure of the colony mission and to the rescue of the last survivor of the original crew.

Saber Marionette J is a series of light novels that are very obscure, and would probably have remained so, had the creators not made a Radio drama taking place 500 years after in the future, Saber Marionette R. R follows Virrey Junior, prince of Romana, and his Marionettes, named after the ones from J. It was eventually adapted into an OVA, and most likely led to the novels getting an Animated Adaptation. The anime starts off as a light comedy, but slowly turns more dramatic as time goes on. It generally has a healthy mix of humor and suspense, and is a Cult Classic to those who watched it, especially in Latin America.

It was subsequently followed by several sequels, most notably Saber Marionette J Again, an OVA revolving around a new Marionette and Saber Marionette J To X, a second and final season. There's also a videogame for the first Playstation called Battle Sabers. It never was released outside of Japan.

A new anime project was revealed

by AIC. If a certain image is to be believed, Saber Marionette J Last Story is going to be a lot more faithful to the original novels.