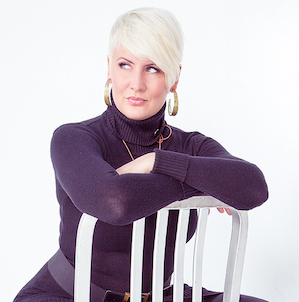 Only you can read me, Troper. What description shall we type today?
Advertisement:

Erin Fitzgerald (born September 21, 1972 in Victoria, Canada) is a voice actress in video games, anime, and cartoons. Her diverse vocal talents allow her to play a variety of characters, from deep-voiced femme fatales, to excitable tomboys, to sweet girly girls, making her one of the most diverse cartoon actresses.

Originally from Vancouver, her first voice acting role was in the animated series Ed, Edd n Eddy, where she played the voices of Nazz and May Kanker. From there, she went on to play dozens of roles in a number of video games, playing more than two dozen roles in Everquest II alone. She's known as one of the more prolific anime voice actresses, playing Guren in Naruto Shippuden, Franceska, Shota, Katen, and numerous others in Bleach, among many other roles. She's continued performing video game roles like Catherine and Skullgirls, and in fact does games more often than anything else she does. She's also done some prominent roles in western animation, most notably in Monster High as the voice of Abbey, Spectra, Cupid, and a number of other characters. She is also featured in Wild Grinders as numerous characters.

As is the case with many of the current crop of voice artists, she is One of Us, an avid video game and anime fan who even set up a Deviantart account to search for fanart of her characters.

As of 2017 during the SAG-AFTRA video game strike, Fitzgerald announced via Twitter that she is only accepting union-based roles

as she has lost some of her older roles note Noire from Neptunia, Sanaki and Olwen from Fire Emblem Heroes being some notable cases.

Trial of the Tropes!

I only do everything!