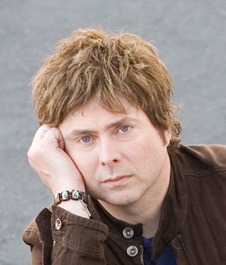 He swears he's not gay.
"I'm not even anatomically correct! I run around naked and I got no junk!!!"
Quinton Flynn suffering multiple personality disorder

with the rest of the Metal Gear cast.
Advertisement:

Quinton Joseph Flynn (born October 10, 1964 in Cleveland, Ohio) is probably the most Trope Overdosed and memetic voice actor in the biz. He quickly shot to fame after his hilarious and memorable performance as Raiden in Metal Gear Solid 2, who managed to avoid drowning, as well as some more of his more prominent roles being those of Axel and Lea from the Kingdom Hearts series, and Reno in the Final Fantasy VII Compilation as well. Got it memorized?

His niche seems to be Hot-Blooded characters, but he can also do quieter characters and even downright comedy relief characters. Oh, and he and Jeff Nimoy aren't gay, as repeated in the con favorite Yaoi Song

In November 2020, images and audio recordings of Flynn sexually harassing female fans surfaced on social media along with multiple accusations from others. Flynn has strongly denied these allegations. He has since been removed from a number of ongoing projects, including World of Warcraft and No More Heroes III.

These roles are a tool of justice: