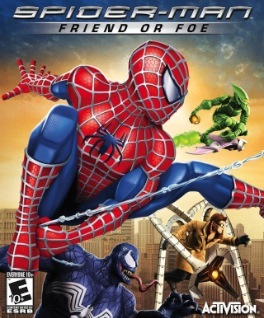 "Spider-Man! I knew you two were in this together!"
Advertisement:

Spider-Man: Friend or Foe is a 2007 Beat 'em Up game published by Activision and developed by three different studios, each of which handled different ports of the game (Next Level Games for the PS2, Wii, and Xbox 360 ports, Artificial Mind And Movement for the DS and PSP ports, and Beenox for the PC port). The game takes heavy inspiration from both the original comics and the Sam Raimi movie trilogy, and was actually released as official tie-in merchandise for the latter.

The plot involves the meteor that brought the Venom symbiote to Earth being split into five shards, scattered across the world, and used to create creatures known as P.H.A.N.T.O.M.s. Spider-Man is recruited by Nick Fury of S.H.I.E.L.D. to find said pieces, and, along the way, enlists the help of both allies and enemies, with the latter being under mind control by whoever is using the meteor shards.

In the game, you play as Spider-Man and a sidekick of your choice, with the ability to switch between controlling the two when you're playing solo. Spider-Man can also utilize his webbing to either throw enemies around, shoot projectiles at them, or disable them for a bit. As you progress, you can collect Tech Tokens (currency used to upgrade your characters and Spider-Man's abilities), DNA Helixes (hidden collectables that unlock extras), and Keystones (used to unlock arenas for use in Versus mode).