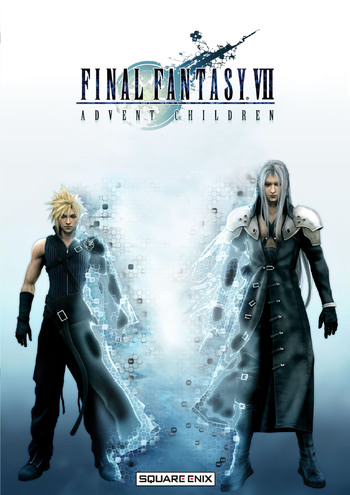 To those who loved this world...
And knew friendly company therein...
This reunion is for you.

Final Fantasy VII: Advent Children is the movie sequel to the seventh entry in the magnitude-describingly popular Final Fantasy series.

Two years have passed since the destruction of Meteor in Final Fantasy VII. People all over the world have become infected with a deadly Lifestream-distributed disease called Geostigma; in spite of this, humanity keeps rebuilding society in the wake of Sephiroth's attempts at global destruction. In the city of Edge, built from the ruins of Midgar, Cloud now lives a quiet life with Tifa, Marlene, and a sickly orphan named Denzel. To Cloud's dismay, he soon discovers his own Geostigma infection, which threatens to shatter his new life. To make matters worse, the influence of Sephiroth still remains: Three young men bearing a resemblance to the "One-Winged Angel" have come looking for Cloud—and the remnants of Shinra—for their own sinister purposes.

Limited-edition copies of the movie came bundled with a novella detailing several characters' points of view during the two-year Time Skip. The Advent Children Complete Blu-ray re-release included an OVA version of one of the novella's stories; it also added additional footage to the film that either expanded on the plot (a necessary move) or altered parts of it (not so necessary).