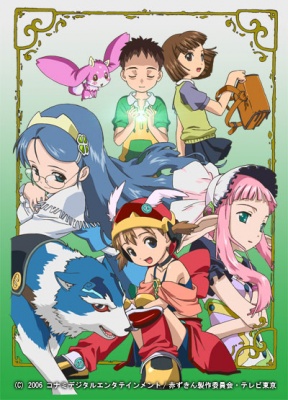 In the past, the world was powered by magic and science. However, a wise and benevolent god grew concerned of mankind's power and split the worlds into two; from then on, one world relied on the power of science and the other on the power of magic. This is the story Souta's mother had told him when he was but a small child. Now, several years later, he lives alone, and all he remembers about his mother is a dream where she is abducted by a monster, he himself being saved by a girl with red clothes.

The dream soon turns out to be reality, as history repeats himself when Souta is attacked by a monster on his way home from school. He is saved first by a strange talking wolf called Val and soon after by a girl wearing the same red clothes as the girl from his dreams. She introduces her as Akazukin (Little Red Riding Hood), one of the three legendary musketeers from the world of magic. Her mission is to find and protect the "key" which connects the two worlds: Souta himself. She must protect him from the Wicked Witch Cendrillon, who wants to use the key to conquer both worlds.

Souta quickly acquires a Quirky Household of strange magical characters, as Val and Akazukin are soon joined by ice mage Shirayuki-hime (Snow White) and the narcoleptic Ibara-hime (Sleeping Beauty). Souta's female childhood friend Ringo is not amused by this turn of events.

Fairy Musketeers was, at first, a single-episode 2005 OVA which came with an Akazukin figurine, aimed more at figure collectors than at anime fans. However, the OVA had some popularity with the Periphery Demographic, and so the concept was soon retooled as a standard children's TV show in the vein of Cardcaptor Sakura. The anime series aired from 2006 to 2007 for 39 episodes.

You can also watch it for free now at Crunchyroll.