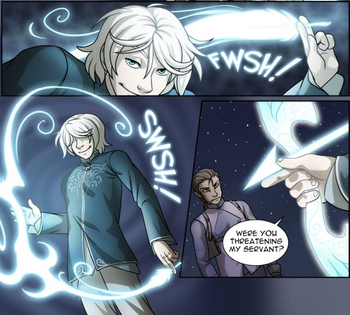 "None of your skills will be of any use against a Servant. In that case, at least imagine it. If it is an opponent you cannot match in real life, defeat it in your imagination. If you cannot defeat it yourself, imagine something that you can defeat it with."
— Archer, to Shirou Emiya, Fate/stay night
Advertisement:

The idea behind this trope is a character with the power to create a weapon. This can either be the power being to create or otherwise summon a weapon, or creating the weapon is but one application of a power they already possess. One character could conjure a weapon out of thin air, while the other created his weapon by clever application of his fire control. Sometimes the character can turn this power Up to Eleven to create a Storm of Blades.

One common use of this trope, especially among the second type, is frequently seen in Tournament Arcs where weapons would otherwise be banned. The person who crafts the weapon will be able to use Loophole Abuse to claim that, since what they're doing is simply an extension of the power they came in with, it's allowed. It usually is.

People who do this will generally possess Elemental Powers. Compare Natural Weapon, which can also fall into the Tournament Arc Loophole Abuse noted above. Can often come about by characters who possess Imagination Based Superpowers, or by an Art Attacker. Shapeshifter Weapon is the one formed from the wielder's body.

Compare Instant Armor and its subtropes for when this sort of thing gets used for defense instead of offense. See also Elemental Punch, when weapons are not in use. A form of Shaping Your Attacks and may or may not involve a Person of Holding. See Summon to Hand for calling existing objects as opposed to creating them — weapons are the most popular application.