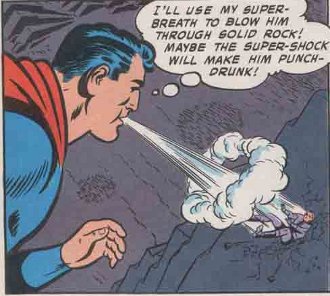 You could say Superman blew him away.
"I'll just put out this fire with my Super-Breath... I've got to think of a less embarrassing name for that..."
— Superman
Advertisement:

This is the ability to expel large amounts of air from one's mouth, blowing things around as if with a powerful wind.

It often overlaps with Make Me Wanna Shout. If it works in reverse, it's Vacuum Mouth. See also Blow You Away and Breath Weapon (for some reason (we blame Superman), a lot of people who have this power tend to make it Icy as well).

Theoretically, this would come hand in hand with Super Strength, since 1) the strength of your breath relates to the strength of your diaphragm (which is a muscle); 2) the amount of air that is breathed out is often so immense in comparison to the breather's lungs (evident by how long such super-breathing tends to last) that it would have to be under absurdly high pressure to be contained within the lungs (which, consequentially, necessitates similarly high muscular power on part of the diaphragm to push out).

Great power and control over one’s breathing is also associated with Charles Atlas Superpower and Supernatural Martial Arts, the implication being that secret breathing techniques can unlock the full potential of the human body. Even in the mundane realm of real life, breathing techniques are an essential foundation of power and endurance in many physical disciplines such as boxing and weightlifting.