Literature / How The Six Made Their Way In The World 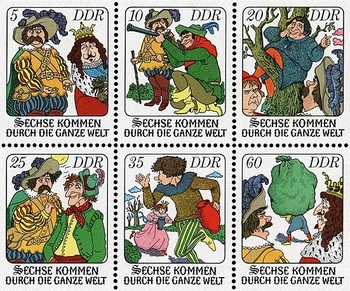 East German stamps from 1977 depicting the soldier and his servants in action
Advertisement:

How The Six Made Their Way In The World is a German Fairy Tale collected by The Brothers Grimm.

The story begins with an unnamed soldier being discharged from the king's military; he only gets paid with three coins. The soldier is unhappy and vows to one day get all of the king's wealth. After journeying for awhile, he encounters five other men and recruits them to be his servants. These people are:

The king announces a footrace between any challenger and his daughter; any winner gets to marry the princess but anyone losing is executed. The soldier arrives with his companions and has the runner compete on his behalf. At first, the very fast runner has an easy time winning until he takes a nap. The sniper fires a shot from far away to awaken him; the runner awakens and finishes the race, winning it easily.

The princess does not want to marry the soldier and the king comes up with a plan: kill the soldier and his companions. He tries to do this by luring them to a banquet with an iron floor beneath them heated up in an attempt to burn them all to death. However, the frost man saves them by straightening his hat and stopping the intense heat.

The king is now out of options and offers the soldier a bribe in exchange for not marrying the princess. The soldier is allowed to take as much wealth from the king's vaults as his servant can carry. Unfortunately for the king, the super strong servant takes EVERYTHING in the treasury. The king sends his own troops after the soldier's company to recover his riches but the powerful lungs of the soldier's servant with super breath blows all but one of them into oblivion. The lone survivor returns to tell the king what happened and the king...decides to leave the soldier alone from now on.