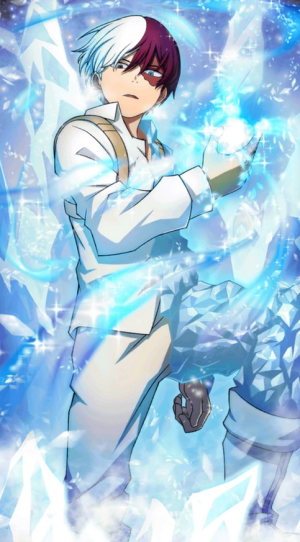 He may seem cold at times, but he's also got a fiery side.
"Nature? Fire? Bah! Both are chaotic and difficult to control. Ice is structured, latticed, light as a feather, massive as a glacier. In ice, there is power!"
— Heidar, Rimewind master, Flashfreeze,

The power to control ice, and create cold and frost at will. May be used as a trinity with Fire and Electricity, hence Fire, Ice, Lightning. Likely to be used as a contrast to fire — if the hero prefers fire, his rival, Archenemy, or Lancer will use ice, forming a Fire/Ice Duo. Sometimes the domain of evil or undead entities as Evil Is Deathly Cold. Goes hand in hand with Making a Splash, and may be involved with wind powers via cold air and snowstorms. In Elemental Rock–Paper–Scissors with fire, one will usually defeat the other, though which one varies. Ice is unlikely to be any stronger or weaker than other elements though for Competitive Balance, and thus Harmless Freezing will be invoked. If you want to resort to this to kill an otherwise invulnerable entity, you're planning to Kill It with Ice.

May be used by Bigfoot, Sasquatch, and Yeti, Snowlems, a Winter Royal Lady, a Yuki-onna, or even the Ice Queen. May be a Tragic Ice Character. People with these powers may also have An Ice Suit, a Freeze Ray, and Icy Blue Eyes, or be subject to Elemental Baggage. They'll also often have blue clothes, hair, and/or skin because Blue Means Cold. If it's not blue, it'll usually be white, as a reference to snow. See also Human Popsicle. Frequently leads to Literally Shattered Lives.

Also called "Cryokinesis". A common and unfortunate side effect of ice powers is using ice metaphors.